Voice: the breath’s tooth.
Thought: the brain’s bone.
Birdsong: an extension
of the beak. Speech:
the antler of the mind.

As the animals go, we go.

The photographs in Remnants are of scientific bird specimens from species (or related species) listed as endangered, threatened, or of special concern in Wisconsin’s Western Coulees and Ridges Ecological Landscape, of which my home county (Dunn) is a part.

One intention in creating these photographs was to become more familiar with endangered and threatened species in the place I inhabit, to “become intimate with [my] home region,” as Scott Russell Sanders writes in his essay, “Homeplace.”

“There is only one world,” Sanders writes, “and we participate in it here and now, in our flesh and our place.”

I fear this world’s demise, with the innocents going first.

These photographs are a contemplation on what we are losing, what will be lost. They are meditations executed with reverence and an intent toward beauty, with hope that our desire for a beautiful world may help us save it.

The actual shooting of the photographs was done with a Holga medium-format film camera, known as a “toy” camera, as it has low-cost construction, a plastic lens, and hardly any control for focus, shutter, or aperture. Taking the photos was very much a meditation: a slow, observational process, involving careful and repeated measurements to estimate focus and composition. Shooting this way allowed me to welcome the accidental and unplanned as partners in the creative process. The texture of film made it an ideal medium for representing the physicality of the specimens in front of me. 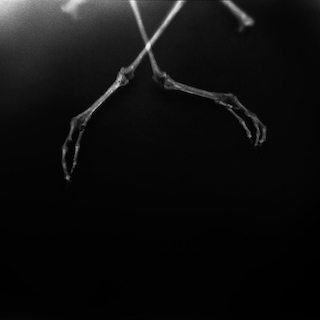